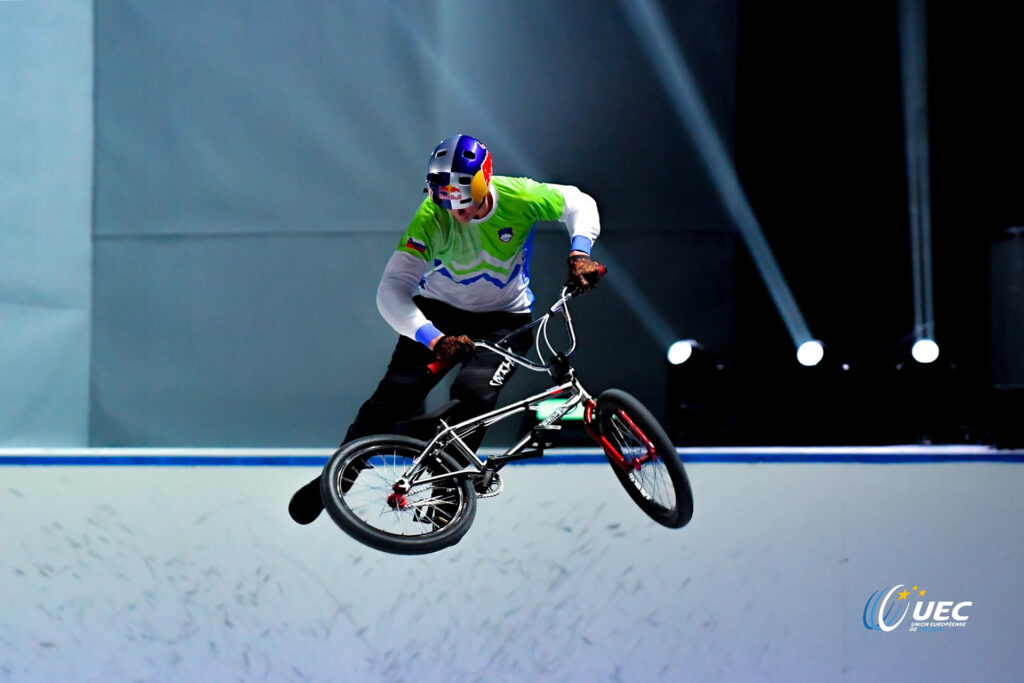 The second European Championship in the Olympic discipline of BMX freestyle cycling under the auspices of the European Cycling Union (UEC) was held in Moscow (Russia) at the Music Media Dome. The international level of participation was especially qualified with 44 riders from 13 countries, and I was the only Slovene on the start list.

WHAT A PARK THAT WAS!?

Let me tell you, the Russians meant bussiness! I can honestly say that this was one of my favourite park yet. When I first saw it, I was in heaven. Everything was spot on! Multiple line choices, perfect obstacles, good organisation… The Russians did very good job on this one. Did I mention that just the heating costs of this place costed around 12.000 EUR per day? Crazy… We would need more events than this one!

It is fair to say that this was my most important performance in this kind of competition so far. I was also the youngest competitor there so my main goal was to have fun and gain some more experience along the way.

It was really nice. After the qualification run on Saturday afternoon I knew that I was riding well and I went straight to the finals. For my final run I was mentally fully prepared. Unfortunately, I have made a few mistakes and ended up on 10th place. It didn’t go the way I wanted, but I’m still VERY happy with the result. There is always room for improvements and I know that with more training on that kind of courses, I can be way better.

BMX Freestyle Park is a fairly recent discipline which has enjoyed even more success over the last few years, especially after its introduction on the Olympic programme at the last Games in Tokyo 2020. The success of the European Championships show that Freestyle Park is destined to develop even further. I am extremely proud to be able to represent colours of Slovenia and I would like to thank Slovenan Cycling Federation for believing in me. Without them, European Championships in BMX freestyle would not be possible for me.

Also, a HUGE THANK YOU goes to my coach Gašper Kristan who was with me the whole time here in Russia, and to my family for their support!