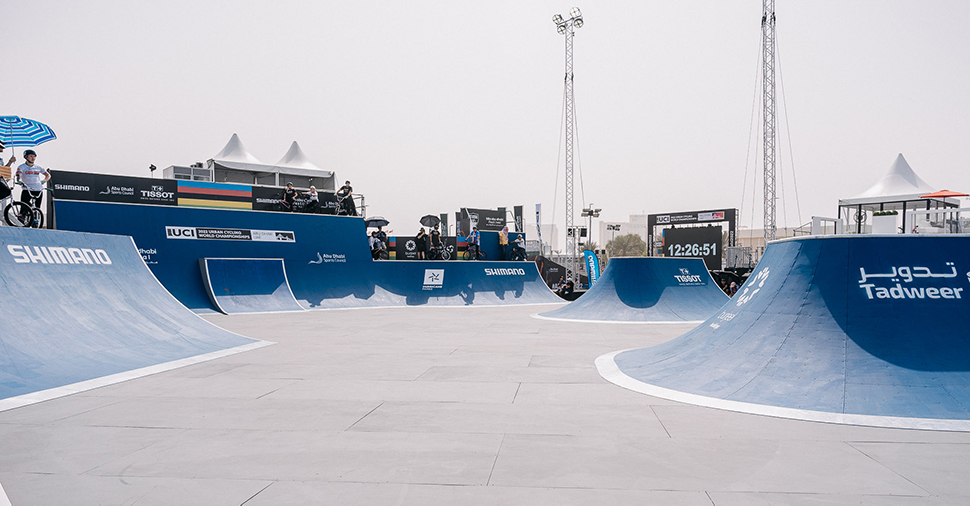 For the first time in the Middle East, the UCI Urban Cycling World Championships was hosted in Abu Dhabi. Top athletes took part in the great arena with the iconic backdrop of the Abu Dhabi Corniche at Nation Towers as part of Bike Abu Dhabi Festival week. Spectators enjoyed in BMX Freestyle, BMX Flatland, and Trials and there was also a lot of the family-friendly activities including short bicycle courses, face painting, bungee trampoline, Graffiti artists, street dancers, BMX stunt shows, DJ, and lots more!

THE PARK & TRAINING IN ABU DHABI

The park was interesting and in general it suited me well. The “jump box” was the only thing that worried me a little. The first training session was quite difficult and I didn’t do all the things I should have done. So I had to make the most of the training the day after, which lasted half an hour. I was one of 63 competitors competing for the title of the world’s best freestyle BMX in the park. The competition was really strong as there were only the best competitors from each country. All of them were completely “in tune” with their bikes so I knew that i had to be on my “A-game”.

Qualies went great but not perfect, because I had fifteen seconds left at the end of the run. In my head I counted on a maximum of 5 seconds, so improvised a bit at the end. It was also the first time that i officially landed a 360 triple tailwhip and I’m very happy! With a total of 74.13 points and on 22nd place, i managed to qualify into semi-finals of the World Championship. Did I mention that i was the second youngest semi-finalist and the fifth youngest participant in this year’s world championship?

For the semifinals we had two runs available, and the best one counted for the ranking. I scored 74 points in the first run, which was enough for 19th place at the time, as several competitors made several mistakes at the same time. In the second run, some showed better runs, but I failed to do so, as I finished the second run with a score of 57 points. In the end I ended up in 21st place, which is still a good result.